Geographically the province could be divided into two zones: the northern one extending from the ranges of the Hindukush to the borders of 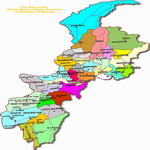 Peshawar basin; and the southern one extending from Peshawar to the Derajat basin. The northern zone is cold and snowy in winters with heavy rainfall and pleasant summers with the exception of Peshawar basin which is hot in summer and cold in winter. It has moderate rainfall. The southern zone is raid with hot summers and relatively cold winters and scantly rainfall. Its climate varies from very cold (Chitral in the north) to very hot in places like D.I. Khan.
The Province has substantial agricultural resources. Cultivated area is 29.53% and irrigated area is 50% of the reported area. Land used intensity is 61.71% and cropping intensity is 106.02%. The major agricultural crops of the province include Wheat, Maize, Gram, Jowar, Bajra, Barley, Rice, Sugarcane, Sugar Beet, Tobacco, Fruits and Vegetables. 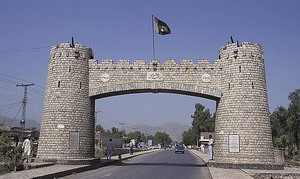 The agricultural produce and its related agriculture businesses, like the overall situation at country level, dominate in the province and is the backbone of the provincial economy. A total of 2.56 million work force is involved in trade, commerce, industry and Agriculture sector which constitute 15% of the total population of the province. Amongst these sectors the agriculture sector takes the major share of the work force i.e. 40% of the total labour force and thus plays an important role in the economic development of the province. The formal Industrial sector comprises of small and medium scale industries and very few large industrial establishments. There are 2254 registered industrial units in the province employing approximately 57290 people, major share being in Textile, Leather, and Apparel sector at 28% followed by Food, beverages, flour mills, and tobacco sector with 27% share.
Geologically, the province is endowed with a large number of minerals including precious minerals such as gold, gems, emeralds, whereas the industrial minerals include phosphate, lime stone, gypsum, marble, nepheline syenite, chromites, china clay, soap stone, coal, silica sand, magnesite, dolomite, mica, slate stone, rock salt etc.
Industries spread mostly in the formal sector are given in the table while micro, small, and medium units in different sectors are manifold that can not be reflected here as they are undocumented. Some of these are in the form of clusters e.g. Leather in Charsada and Bannu, Textile in Matta Mughal Khel, Mingora, and D.I.Khan, Gems in Peshawar, Mingora, and Chitral while Marble mining in Buner.